Press and media “Waxin’ in Camerino” 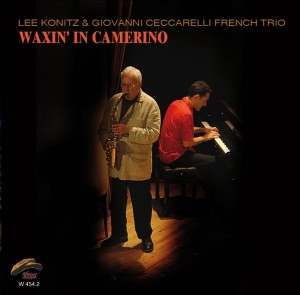 Quotes by the press

…The entire album stands for its relaxed mood, balance between the music’s foreground and background, cohesion in the musicans’ aims.

(Lee Konitz and the Giovanni Ceccarelli’s French Trio) through their experience and creativity released a record which does not sound like the usual standards’ records. As a matter of fact it a very fresh CD, where the musicians give new renditions of classics like “On Green Dolphin Street” and “Long Ago and Far Away” without turning them upside down: a task which a few artists succeed in.

“Waxin’ in Camerino”… contains eight standards which have been performed with an absolutely original and contemporary kind of expression. This music is far from us in time, but it is indeed close to us emotionally.

The titletrack, composed by Konitz and Ceccarelli, (is) one of the album’s highlights; this record stands out as a whole for its rather high level.

“Waxin’ in Camerino” is a collection of known standards whose rendition is not based, as usually is, on a re-interpretation of the songs’ harmonies. As a matter of fact, such interpretations spring from variations of the melody, tone and dynamics: the songs thus are brought to a new life.

(Giovanni Ceccarelli’s) French Trio is a tight group whose playing is quite effective and sparse. Konitz is at ease with these musicians, and we can hear it from the music.

(“Waxin’ in Camerino”) is a summary of the pianist’s creative talent and technique, showing not even the slightest tendency for self-reference.

After “Daydreamin’”, recorded in Paris and containing original compositions, the pianist from Marche (Italy) releases a new jazz masterpiece at the Teatro Marchetti in Camerino, together with Lee Konitz, Chris Jennings and Patrick Goraguer… ’Waxin’ in Camerino’ is an album of deep intimity…

(The) great Konitz… is supported by Ceccarelli’s modern and expressive pianism; in addition, (the Italian musician) explores new sounds.

Konitz plays with inspiration, Ceccarelli is no exception, as the musicians with them on stage…

Pietro Scaramuzzo talks with Giovanni Ceccarelli about CDs “Waxin’ in Camerino” and “Daydreamin'”.